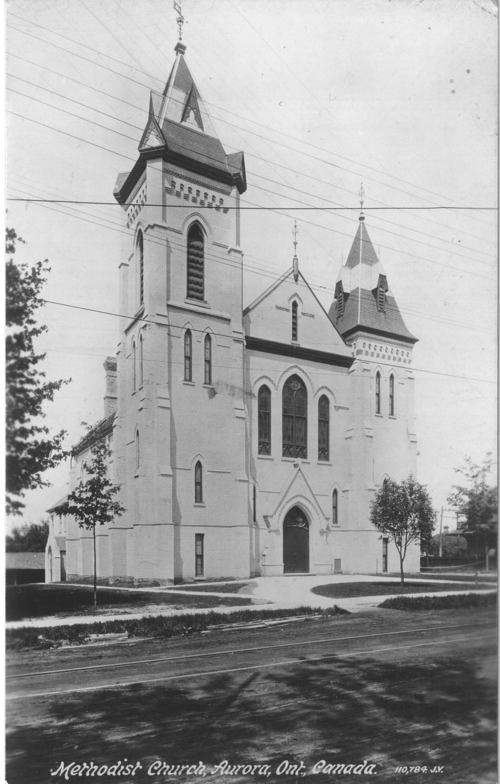 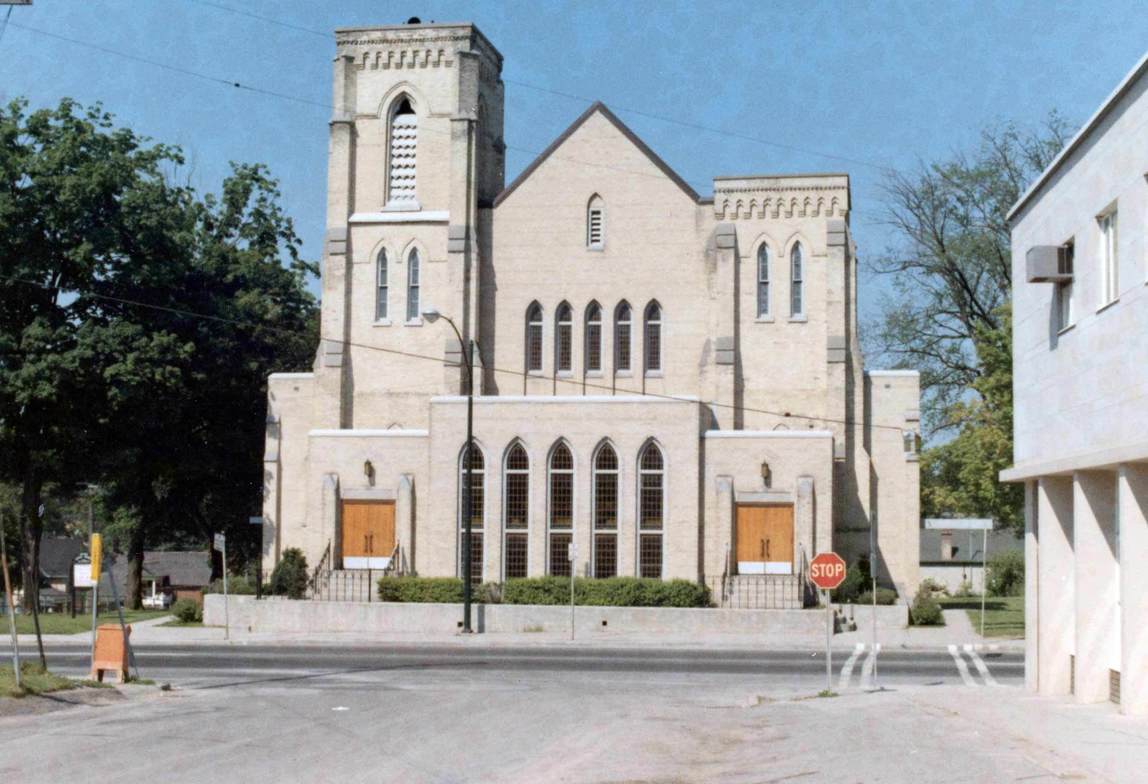 One congregation; three buildings on the corner of Yonge & Tyle since 1818

February 21, 1818: a deed is signed formalizing William Tyler’s donation of one acre of land on the north-west corner of Yonge andTyler Streets in Aurora for the formation of a Methodist Episcopal Church. The congregation holds their opening service at the end of that month and has continued to worship on the site since that date.

February 1818: a log church is built to provide services for members of the Methodist Episcopal Church at the corner of Yonge & Tyler.

1855: larger frame church is built to accommodate a growing congregation. The log building is moved to the back of the property to serve as Sunday School.

March 23, 1877: the frame church is partially destroyed by fire –a decision is made by the trustees to build a new, grander edifice.

The 1878 building: This new building was designed by Architect Henry Langley, well-known for designing public buildings. Over his working life time Henry Langley designed 70 churches throughout Ontario. He was considered to be a conservative in architectural design which was reflected in the Gothic Revival style of Aurora (Methodist) United Church with its steeply pitched gable roof and two asymmetrical square towers. The projected cost of the building was $8,915 less lighting and heating; or $8,315 without the large 100 foot spire. Fortunately it was decided to include the tall spire along with a shorter one. The cost of the gas lighting would be an extra $528. The work was contracted out; the cost of the stone and brick (made locally) was $3,870, the carpentry and joining $3,800 and the seating contract 17 cents per foot, increased to 25 cents per foot for the gallery seating (with better lumber). Opening services were held on Oct. 1, 1878 officiated by Reverend D.F Gee.

1893: a cyclone sweeps through Aurora blowing off the large south spire and damaging the smaller one. The taller spire is replaced with a shorter one.

1909: a wing is added to the west end of the church to provide the Ladies’ Parlour.

1925: Methodist, Congregationalist and some Presbyterian churchesamalgamate to form the United Church of Canada.

1943: both spires are removed having been struck by lightning several times.

1957: an addition to the front of the church creates a new entrance, the Narthex, and school rooms beneath.

1977: the first stained glass window is installed in the Narthex to commemorate the life of T.H. Oliver.

1975: a gymnasium is added to the north side of the building.

1987: the gymnasium is demolished, replaced by a two-story office wing.

1993: four additional stained glass windows are installed in the Narthex to celebrate the 175th anniversary of the founding of the congregation.

2009: a significant sanctuary redevelopment shortens the balconies, removes the wood paneling to exposethe iron railings in the gallery, replaces the rear wall with a folding glass door and installs a state of the art AV system. The centre window was donated by the Oliver family in 1977 in memory of T.H. Oliver.

The other four windows were commissioned in 1993 to celebrate the 175th anniversary of the establishment of the Aurora Methodist Church congregation at the corner of Yonge and Tyler Streets in 1818.

All five windows were created by the same artist, Stephen Taylor. Although completed 16 years apart, the story of Jesus’ life and work provides a common theme weaving the five windows together.

Central to each window is the image of Christ portrayed at different stages of his life; the birth of Christ, Christ as a Child, Jesus the Carpenter, Jesus’ Public Ministry, and the present Christ. Jesus the Christ, central to our faith, is for us the window through which we catch a glimpse of God. Christ through the Spirit walks with us in all of life. The timeless beauty of the stained glass windows reminds us that we are not alone.

Stephen Taylor, A.R.C.A., F.M.G.P., R.C.A., was born in Surrey England in June 1940 and immigrated to Canada in 1968 after receiving a stained glass commission at St. James Cathedral in Toronto through Yvonne Williams’ Toronto stained glass studio. He went on to develop a significant career in Canada doing numerous liturgical and residential stained glass commissions throughout Ontario. Stephen and his wife, Denise Belanger-Taylor a glass blower, worked on their art at the Belanger-Taylor Glass Studio in Milford Ontario.

In 1995 Stephen they moved to New Zealand where Stephen continued his glass career with much success. He died unexpectedly on July 19, 2009.